The next section is “Memories.” What do you remember most about high school? It was so long ago I don’t remember much, except the multiple concussions I received playing football. That could explain the “not paying attention” aspect of the last four decades.

The final section is a bit trickier: “Milestones & Achievements.” Hmm, do I tell the truth, which is pretty boring? Or do I treat this reunion questionnaire as if it’s Facebook?  (Or as I like to call that social media phenomenon: “Look-at-me!-Look-at-me!-Look-at-me-dammit!-book.”)

It is rather convenient that we now live in an era where the truth is whatever we claim it is. So, for example, when I describe personal milestones, claiming that my humor column is syndicated in 500 newspapers is pretty much the same thing as wishing it appeared in more than the current two newspapers, right? And claiming that my suspense novel is being made into a Hollywood movie is pretty much the same thing as hoping that one day Steven Spielberg appears at my front door and says, “Bill, I’ve just GOT to have the rights to your book! Name your price!” It could happen. I mean, Spielberg might be one of the nine people who purchased the book on Kindle.

Maybe I’ll just go with the plain truth: marrying my high school sweetheart in 1982 brought tears to my eyes. Then I cried a couple years later when our first daughter was born. I also cried when that miraculous event caused me to become an ex-atheist. A little later I cried when the ball went through Buckner’s legs. The next year I cried when our second daughter was born. Then I went through a fairly stable period emotionally, but broke down again when Foulke got the last out and the Red Sox finally won the World Series. And just a couple months ago I cried when we made our last mortgage payment.

My most interesting achievement, however, cannot be captured on a questionnaire. I will be attending the 40th reunion party with a genuine trophy wife on my arm. You know what I mean: the kind of gorgeous woman who causes everyone to whisper, “Wow, he must be rich!”

In this instance, my trophy wife also happens to be the high school sweetheart I married in ‘82. But amazingly, while the rest of us look like we are definitely in our late 50s, my darling bride and mother of our kids looks like she’s about 35, tops.


It should be a fun evening. I know I’ll cry. I just hope I pay attention. 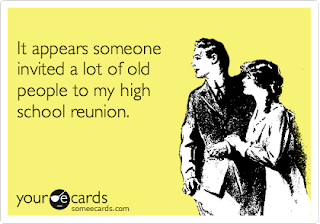