Church In Trouble? Then It’s Time To Rejoice!

A couple months ago my Archbishop listed some sobering statistics in the archdiocesan newspaper. He compared the current activity here in the Hartford Archdiocese to what was happening back in 1967. Here are the stark facts: there are 68-percent fewer priests now than there were in 1967; 82-percent fewer seminarians; 76-percent fewer students in Catholic schools; 84-percent fewer church marriages; and finally, 65-percent fewer people attending Sunday Mass nowadays compared to approximately five decades ago. In our modest-sized Archdiocese, that percentage translates into a jaw-dropping quarter-million people who are NOT at Mass anymore on any given weekend.

Wow, those figures are indeed sobering. About a week after this information was published, my own parish held an emergency finance meeting open to all parishioners. The basic topic of the meeting was this: our parish has been identified as “unsustainable,” which means at our current pace we will be bankrupt in a couple years. The facts are undeniable: Mass attendance has dropped steadily during each of the past five years, and not surprisingly, donations to the parish have dropped each year, too. We are in a bad way, and I’m quite sure countless other parishes and dioceses across the United States face similar situations.

If the Church were a corporation or other secular institution, these numbers might indicate that it is on the verge of extinction. (And don’t doubt for a minute that many people in our godless culture—especially those in the news media, entertainment industry, and academia—would be thrilled if the Catholic Church ceased to exist. We have a lot of powerful enemies nowadays.)

However, as Catholics, when we learn about these dire statistics, there is only one proper response: we must rejoice!

Wait. What? Did you just say rejoice? Helloooo! Anybody home?! How can you say that, Bill? The Church is about to collapse, and you say we should rejoice? Did you start drinking again?

Calm down, I did not start drinking again. Let me explain. First, I’m not rejoicing because I am secretly an atheist social engineer who thinks the Church is standing in the way of my Marxist utopian plans to transform the culture. No, I am rejoicing because the Catholic Church is the only institution in the history of the world that has been given a divine guarantee of success.

In Matthew’s gospel, chapter 16, Jesus instituted the Church. He named Peter the “Rock” upon which the Church would be built. Then Jesus said this about the Church: “The gates of Hell shall not prevail against it.” This is a clear promise from Our Lord that the Church will survive, no matter what.

It is important not to lose sight of the “big picture.” The Catholic Church is not just a Connecticut organization, and it has not existed for only the last 50 years. The Church is a worldwide organization and it has existed for 2,000 years. Over the centuries the Church has faced many dire situations, some far more frightening than what we see in our local communities today. The Church may be struggling right now in parts of the U.S. (Europe is worse, by the way), but the Church is growing like crazy in other regions of the world.

Even though we seem to see nothing but problems all around us, we can be confident the last chapter of the story has already been written by God. And in that final chapter, the good guys win! God’s Church will be victorious.


God’s Church will be victorious. Christ gave us that sure promise. So the only proper response is to rejoice! 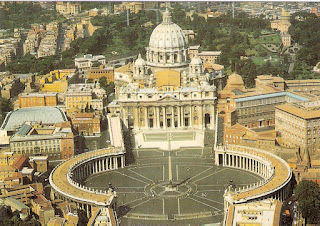