Church is in Trouble – Part 2

A couple weeks ago I discussed the situation here in the Hartford Archdiocese and in my local parish. In a nutshell, we are struggling. Mass attendance has plummeted in recent decades, and as a result, donations also have plummeted. Which means many parishes and other Catholic operations are in real danger of shutting down.

Because the situation is so dire, I said our only response is to rejoice. And not surprisingly, I received a fair amount of feedback, asking whether I’ve lost my mind, or started drinking again, or both.

Well, I’m still sober, thank God, and regarding the whereabouts of my mind, that’s always up for debate. But the reason I said we must rejoice is because the Catholic Church is the only institution on earth that has been given a divine guarantee of success. (A guarantee, by the way, which has never been given to the United States of America. With the national debt approaching $20 trillion and the populace becoming more and more self-centered, irresponsible, and violent, how long do you really think this nation can survive? Just sayin’.)

When Jesus founded the Church 2,000 years ago, He specifically said “the gates of Hell shall not prevail against it.” This means the Church cannot fail; it cannot collapse; it cannot and will not disappear from the face of the earth. Jesus promised that He will never let that happen.

So, I said this fact should give us confidence and help us to stay optimistic even when Mass attendance and parish finances are gloomy. However, if I gave the impression that everything is peachy keen and there’s no pain and heartache as a result of the current situation in the Church, then I apologize. I was in no way trying to say we can dismiss our problems as trivial, and simply sit back complacently and wait for Mass attendance to swell right before our eyes.

The fact of the matter is: there is plenty of pain and heartache as a result of our current situation. Much of the heartache comes when historic parishes flounder financially and then finally shut their doors for good. It’s no fun when the church built by your great-grandfather’s generation—the place where all your loved ones over the years have been married and buried—is shut down, sold off, and turned into, say, a community rec center owned by the city.

After all, why does the Catholic Church even exist? That’s simple: to make saints and get souls into Heaven for all eternity. Those who decide they’ll somehow make it to Heaven while ignoring Jesus’ Church and the grace-giving sacraments He instituted, are taking a big gamble, a gamble with eternal consequences.

So yes, even though Jesus promised that the Church will be victorious, He never said there would be no casualties. The current situation is indeed grim. To be blunt about it, the present state of affairs in our Church is causing countless precious souls to end up in Hell. This fact is quite sobering.


We can rejoice—while at the same time knowing that victory will be won only after a long and grueling struggle. 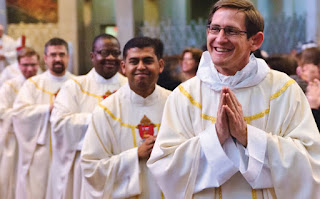