Neil Armstrong and the Other Guys

This Saturday marks the 50th anniversary of the Apollo 11 mission, when Neil Armstrong and some other guy walked on the moon. You could make a strong case that this event is the most spectacular achievement in all of human history — not counting, of course, the invention of the glazed cruller, which is Number One on my all-time list. 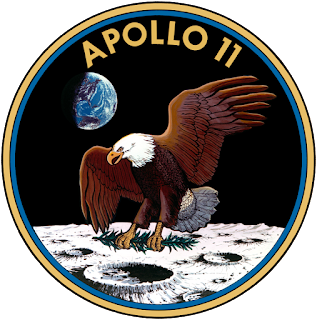 At that moment in the summer of 1969, the entire world held its collective breath as Neil Armstrong, soon to be followed by some other guy, step onto the surface of the moon. After spending the previous four days rehearsing his momentous first words from the lunar surface (which probably annoyed the heck out of the other guy and the even lesser known other other guy), Neil hopped down onto that dusty terrain, took a deep breath, and declared, “That’s one small step for man, one giant leap for mankind.” Oops, he forgot the “a.” It was supposed to be, “That’s one small step for a man, one giant leap for mankind.” 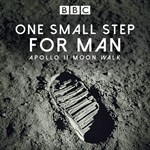 I saw a documentary years ago where Neil Armstrong insisted he said the word “a” before saying “man.” But in the background you can see two other astronauts, presumably the other guy and the other other guy, shaking their heads and rolling their eyes. They knew Neil blew the line.

The other guy laughed and said, “Yes, you’re right. It was A man!” Then they both broke into song, crooning that old church hymn: “A-man. A-man. A-A-man, A-man, A-man, Hallelujah!” 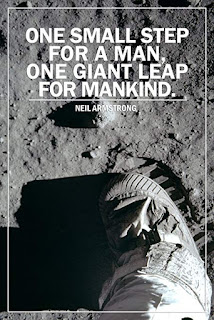 Finally, Neil yelled, “What are you guys, nine years old?! I said the word ‘a’! I just said it softly. Jeez Louise, I’m going outside to get some air.” To which the other guy said, “Um, bad idea, Neil. We’re in outer space. There’s no air out there. Hey man, we’re just kidding. Relax.”

Then the other other guy said quietly with a smirk, “A man, we’re just kidding. Get it? A man? Hee hee.”

Even though Neil Armstrong was pretty steamed about being teased throughout the entire 238,000-mile trip from the moon back to the earth, he ended up with the last laugh. Once they returned home safely, and the many celebrations and ticker-tape parades commenced, all the attention was focused on guess who? That’s right, Mr. First Man to Step on the Moon, that’s who. 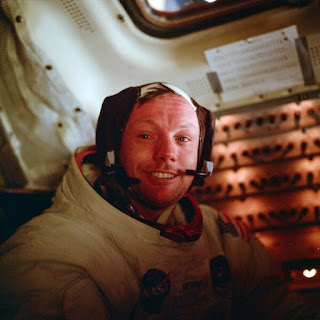 Walter Cronkite himself set the tone for future journalists and historians, when he said this to millions of TV viewers during a big parade: “And here comes the car with the three Apollo 11 astronauts. The first man to set foot on the moon, Neil Armstrong, is in the middle. And he’s flanked by the other guy and the other other guy.”

If you conducted a survey of random people on the street, and asked, “Who was the first man to walk on the moon?” many would quickly reply, “Neil Armstrong.” But when you asked, “And who were the other two astronauts with him?” I bet you would get mostly blank stares. 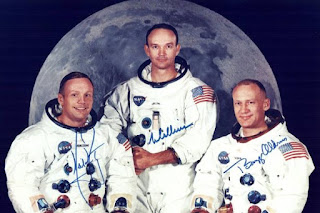 For the record (thank you, Google), the other guy was Buzz Aldrin, and the other other guy was Michael Collins. To all three astronauts, I tip my hat and say, “A man, you guys are terrific! Your amazing feat will never be forgotten — even if we can’t remember your names.”