St. Michael, Defend Us in Battle

The prayer was written by Pope Leo 13th way back in the 1880s. The story goes that Pope Leo had a terrifying vision. In the vision he saw Satan being allowed by God to have one century in which to do his most destructive work. Satan chose the 20th century. You’d have to say the vision came true since during the 20th century there were two world wars, and atheist regimes such as the Nazis and Communists murdered well over 100 million innocent people.

After having this vision, Pope Leo quickly wrote the prayer, asking St. Michael the archangel to protect God’s people. 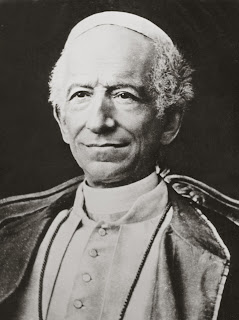 In the Bible, only three angels are given proper names, and all three are considered by the Church to be archangels. This is a higher category of angel. It’s kind of like they got their Ph.Ds, while the rest of the angels only got bachelor’s degrees. (Well, actually, it’s nothing like that.)

St. Gabriel is the messenger angel. He appeared to Zechariah, Joseph, and Mary during the Nativity episodes in Scripture. St. Raphael is the healing angel. We read about him in the book of Tobit in the Old Testament. And St. Michael is the warrior angel. He is mentioned by name in the book of Daniel, and whenever we read about “the angel of the Lord” defending Israel, most scholars believe that was Michael in action.

The prayer to St. Michael, written by Pope Leo, is rather simple and yet very profound. It goes like this:

“St. Michael the archangel, defend us in battle. Be our protection against the wickedness and snares of the devil. May God rebuke him, we humbly pray, and do thou, O prince of the heavenly host, by the power of God, thrust into hell Satan and all the evil spirits who prowl throughout the world seeking the ruin and destruction of souls. Amen.”

Dr. Peter Kreeft discusses the Prayer to St. Michael in his brilliant little book, “How to Win the Culture War.” Kreeft explains that the conflicts we see in our world today are not based on politics or economics or ethnicity; they are instead spiritual battles. Kreeft writes, “Our enemies are demons. Fallen angels. Evil spirits.” Unfortunately, most people nowadays in our modern, sophisticated world do not realize this.

However, the New Testament is quite clear. Jesus warned Peter, “Simon, Simon, behold Satan has demanded to sift all of you like wheat” (Luke 22:31).

St. Peter learned this lesson and passed it on to us: “Be sober and vigilant. Your opponent the devil is prowling around like a roaring lion looking for someone to devour” (1 Peter 5:8).

St. Paul wrote, “Our struggle is not with flesh and blood but … with the evil spirits in the heavens” (Ephesians 6:12).

And Pope Leo 13th understood this fact. That’s why when he had his horrific vision of spiritual warfare, he called on a spiritual warrior to defend us.

Although most Catholics today are unfamiliar with the Prayer to St. Michael, it’s beginning to make a comeback. In 1994 Pope John Paul II urged Catholics once again to recite this prayer. Some parishes are reviving the practice of offering this prayer at the end of Mass.


Even though the 20th century was unprecedented in the amount of evil that occurred, our current century is still quite young, and it has the potential to be even worse. As Catholics, let’s call on all of our resources in the Communion of Saints. Let’s implore St. Michael, the warrior angel, to defend us in this battle for souls.
Posted by Bill Dunn at 5:45 PM