Imagine there is a new game show on daytime TV. A contestant is selected at random from the studio audience. The person comes up on stage, and here is how the game is played: the person must choose either Door No. 1 or Door No. 2. Behind Door No. 1 there are two possible options: either a prize of one million dollars or nothing. Behind Door No. 2 there also are two possible options: either nothing or a large, angry man who comes through the door and punches the contestant right in the face.

As you might suspect, the ratings for this show are not very good. Even the dumbest contestant will choose Door No. 1 every time (and doesn’t it seem there must be a screening process for game show audience members, whereby anyone with an I.Q. higher than 80 is not allowed in?).

This game show scenario is a modern-day version of Pascal’s Wager. Blaise Pascal was a famous 17th century French mathematician, inventor, and Christian philosopher. He was a genius child prodigy, which means he was way too smart to be selected as a game show audience member. 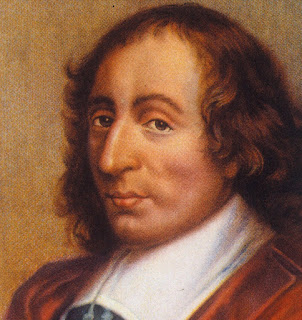 Pascal devised an argument in Christian apologetics, which has become known as “Pascal’s Wager.” He explained that God either exists or He doesn’t. People should choose to believe God exists because if they’re right, they “win” eternal joy in Heaven, and if they’re wrong, they lose nothing. However, if people choose to believe that God does not exist, if they’re right, they win nothing, and if they’re wrong, they lose everything in the form of eternal torment in Hell.

So this is similar to our fictitious TV game show, except without all the flashing lights and music and commercials every six minutes.

Many atheists sneer at Pascal’s Wager, acknowledging the logic behind it, but insisting they cannot “force” themselves to believe in a deity they know does not exist. Even some Christians criticize Pascal’s Wager, claiming that choosing to believe in God simply to “win” a prize and avoid torment is a selfish reason to have faith.

But here are a couple things to consider. First, if our motivation for seeking God is indeed selfish—the desire to have eternal joy rather than eternal torment—God is OK with that. He knows we’re weak and sinful and self-centered. If we at first draw near to Him with less than ideal motives, eventually we will come to understand how majestic and righteous and perfect God truly is, and our motives will change and become more noble and less selfish. We will stop thinking about ourselves and seek God for His own sake, out of pure love for Someone who is infinitely good and merciful. 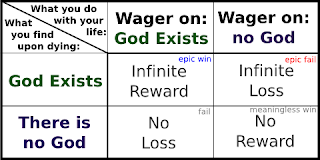 Second, despite what many atheists think, there is NO scientific proof that God does not exist. Science studies only the natural world and has no authority at all to comment on supernatural phenomena. If someone honestly and openly studies the many philosophical proofs for God’s existence (for a start, search Aquinas and Kreeft), he will discover the question is not nearly as clear-cut as modern atheism insists. He just might reach a point where he can sincerely consider Pascal’s Wager and realize there is no downside to believing in God’s existence.


So it’s a rather simple choice: do you choose Door No. 1 or Door No. 2? At the end of our earthly journey, when the door we choose is finally opened, we will discover that faith in God is so wonderful, a million dollar prize will seem like ten cents. 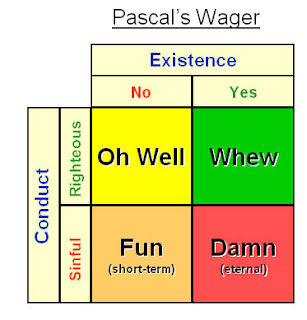