Simeon didn’t even turn to acknowledge the sarcastic men who were taunting him. He had heard taunts such as these for so many years now, he had lost count. The ridicule this day was actually rather tame, compared to the accusations of insanity and demon-possession he occasionally heard. 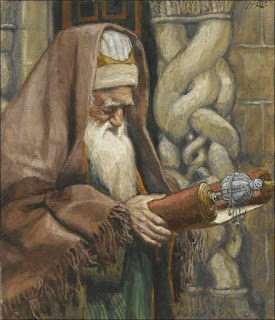 However, Simeon knew what he knew, and he wasn’t going to ignore it just to avoid being mocked. He remembered that day vividly, though it was many decades earlier. He remembered every word of the conversation he had with God—or rather, the monologue God issued to him, since Simeon was too frightened and frozen at the time to utter a sound in reply.

“You are righteous and devout, Simeon,” the voice declared. Simeon felt the power of the Holy Spirit surge through his body. The message continued, “You shall not see death until you have seen the Messiah of the Lord.”

Afterward, Simeon regretted that he had not replied to the Lord. He knew he should have said, “Thank you,” but what he really wished he had said was, “When?”

Being told by God that something very special would happen to him was quite a blessing—Simeon knew that. But not knowing WHEN it would happen made the whole thing seem, in Simeon’s mind, almost like a curse instead. 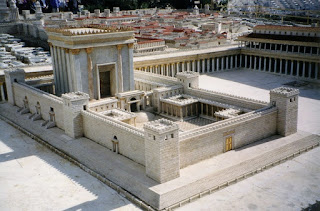 Simeon understood that God’s proclamation had implied his life would end soon after the sighting finally occurred. Many people might be more concerned about this sobering aspect of the message, and not be in a hurry at all to see it fulfilled. But Simeon didn’t care. After so many years of waiting and wondering, Simeon just wanted it to happen.

Occasionally, Simeon would see a majestic stranger enter Jerusalem, complete with a huge entourage, and he would be sure this must be it. The last time that happened, about six months earlier, Simeon threw himself at the feet of a tall and princely-looking man, who must have wondered if Jewish senior citizens always gave such a warm welcome to fabric merchants from Syria. The murmuring about insanity increased drastically after that particular episode. 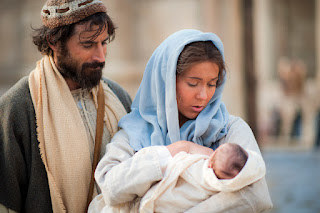 And then, this morning, for the first time in decades, Simeon once again heard the voice. It said simply, “Him.”

Him? Him who? Simeon thought frantically. You mean that guy over there with the woman holding an infant? “No, HIM,” the voice replied. At once Simeon knew—somehow—that God was referring to the infant. And once again, for the first time in decades, he felt the power of the Holy Spirit surge through his body.

Simeon went to the woman and gently took the child from her arms. She didn’t resist. With tears streaming down his cheeks, he praised God and said, “Now, Master, you may let your servant go in peace, for my eyes have seen your salvation!” 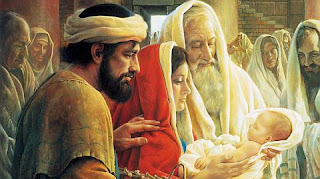 Inspired by the Spirit, many other words poured from Simeon’s mouth, most of which he didn’t quite comprehend, being so overcome with joy at that moment. But he could tell from the woman’s piercing eyes that she was committing every single, startling syllable to memory.

In a matter of minutes, it was over. Simeon handed the infant back to the woman, smiled at the young family, and turned and walked away.


“Yes, as a matter of fact I have,” Simeon said. The mockers’ jaws hung open in amazement, partly because Simeon had actually responded, but mostly because of the joyous peace radiating from Simeon’s face. “Don’t be frightened, my friends,” Simeon continued. “The Messiah is here. Salvation has come to all the world.”
Posted by Bill Dunn at 5:28 PM