I Believe in the Creed

Do you remember the old Federal Express commercials, where the guy talked a mile a minute? Those commercials were very popular back in the early 1980s.

Wait. What do you mean you don’t remember? I’m not that old, am I? Hey, don’t answer that! 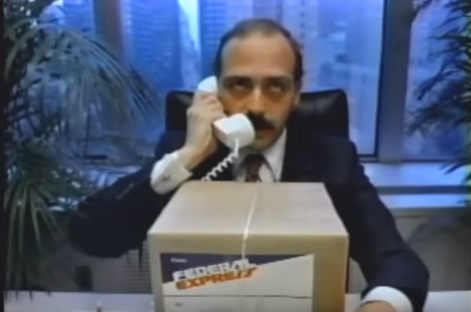 A while ago, the original “Motormouth” commercial for Federal Express (now called FedEx) was voted the most effective TV advertisement in history. Go to YouTube and search for “FedEx Motormouth.” The commercial is clever, funny, and actor John Moschitta’s ability to talk so quickly is amazing. (And that was really him. There were no fancy computers back then to speed up his speech.)

Anyway, I was reminded of those commercials the other day while at Sunday Mass. (No, a FedEx guy did not race in and deliver a package on top of the altar.) When it came time for the congregation to recite the Nicene Creed, the priest started by saying, “I believe…” and then we all joined in. Everyone in the church started out at a reasonable pace, but then as we continued, we went faster and faster, until the final line sounded like, “resurrectionofthedeadandthelifeoftheworldtocomeamen.”

I realize it’s easy to mindlessly zip through the statements we recite each and every week at Mass. On the one hand, it’s good that we make these important declarations on a regular basis, so they become ingrained in us. But on the other hand, because they are such familiar words, it’s easy for our mouths to speak while our brains are not contemplating any of it. And contemplation is impossible if it seems we’re trying to squeeze the entire Creed into a 30-second TV commercial.

The Creed is, in a word, awesome. The Creed states THE most important beliefs of Christianity. Among other things, the Creed offers a clear declaration of the Holy Trinity. We start by saying, “I believe in one God, the Father almighty, maker of heaven and earth, of all things visible and invisible.”

This statement separates us from the secular culture in which we live. We are claiming unequivocally that we are theists; in other words, we believe that God is real. He is the divine, eternal Being Who created everything in the Universe.

The very next statement in the Creed is this: “I believe in one Lord, Jesus Christ, the Only Begotten Son of God.” Then a few sentences later we get to use a very cool word, “consubstantial.” We say this about Jesus: “...begotten, not made, consubstantial with the Father.”

We are stating that Jesus Christ is the Son of the almighty creator God, but Jesus did not come into existence at some particular point in time due to a specific creative action by the Father. Instead, we believe Jesus has existed for all eternity, way before time began. When we say Jesus is “consubstantial with the Father,” we mean He is of the same substance as the Father. The old way of saying it was, “...one in being with the Father.”

The doctrine of the Trinity means we believe in one God — we are definitely montheists — but this one God, in His mysterious supernatural existence, consists of more than one person. The exact number, by the way, is three, which we focus on a little later in the Creed when we say, “I believe in the Holy Spirit, the Lord, the giver of life, who proceeds from the Father and the Son, who with the Father and the Son is adored and glorified.”

The Creed clearly describes our belief in one God who exists in three persons, Father, Son, and Holy Spirit. If you don’t exactly grasp how the Trinity works, don’t be alarmed; it’s an article of faith. As long as we’re on this side of eternity, constricted by our 3-dimensional natural world, it’s going to boggle our minds. But I suspect that once we leave this earthly domain and transition into the heavenly realm, it will be so obvious that we’ll slap our foreheads and exclaim, “Wow, now I get it!”

So, the Creed is a tremendous summary of our most basic and important beliefs. At Mass we should speak it slowly and clearly, and dwell on each amazing phrase. It is the heart of our faith. The last thing we should do is recite it like we’re making a Federal Express commercial in the 1980s.