Have you ever been in a conversation and the opportunity arises for you to offer a really clever comment, but unfortunately the clever comment does not occur to you until about 20 minutes later?

Sure, we’ve all been there. The meeting has concluded and you’re on your way back to your cubicle. Or the person you’ve been speaking to has already said goodbye and left. Or you’re driving home, and suddenly your brain says, “Ooh ooh, I got it! If you just say THIS in reply to THAT, it will be so funny!” The only problem is, the moment for your witty rejoinder has come and long gone. It’s way too late now to employ your brilliant comeback. 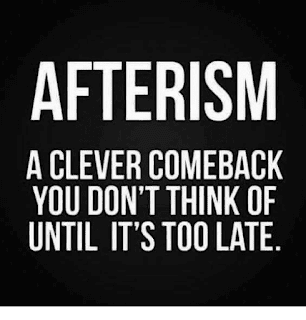 There is a phrase that describes this situation: “l’esprit de l’escalier,” or in English, “the wit of the staircase.” French philosopher Denis Diderot came up with this phase after getting into an argument at a party. He was angry and flustered during the argument, and he didn’t begin to think clearly again until he had gotten to the bottom of the stairs.

In doing a little online research, I could not discover whether Diderot ran back up the stairs, located his adversary, and proclaimed his clever comeback. I hope he did not do that. The only thing worse than thinking of a witty comeback far too late is to say it out loud anyway after the moment has passed. When you can’t think of anything clever to say, you look like a dimwit. But when you return 10 minutes later and blurt out your witty reply, you look like a dimwit with serious emotional problems. 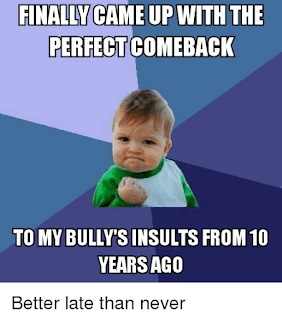 There was an episode of the sitcom Seinfeld called “The Comeback.” During a business meeting, hapless George Costanza is wolfing down free shrimp, and a coworker says, “Hey George, the ocean called. They’re running out of shrimp!” George becomes flustered and humiliated as everyone in the room laughs, but he can’t think of anything to say. 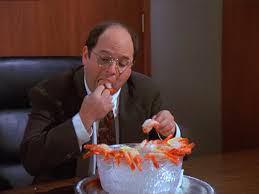 Only while driving home does George think of a reply, but it’s too late. The rest of the episode shows George frantically scheming to attend another meeting with the same person — including paying for a huge bucket of shrimp — so he can launch his clever comeback. Because it’s George, of course, it backfires big time.

The Germans have a similar term, “treppenwitz,” which also means “the wit of the stairs.” However, over the years the German phrase has evolved to mean the exact opposite, that is: something said in an attempt to be clever, but which is actually very rude and offensive.

This is what happened to George in the Seinfeld episode. He flies to Ohio to sit in on a meeting he really doesn’t need to attend. He brings an expensive bucket of shrimp and starts chowing down hoping to provoke the same comment from the same coworker. When the coworker obliges and says, “Hey George, the ocean called. They’re running out of shrimp!” George triumphantly stands up and exclaims, “Oh yeah? Well, the jerk store called, and they’re running out of you!”

For a few moments, George basks in his victory, until the coworker nonchalantly replies, “What’s the difference? You’re their all-time best-seller.” 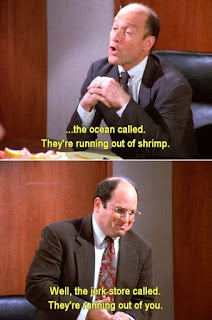 Everyone in the room starts laughing and George turns red. Recalling an inappropriate suggestion from his oddball friend, Kramer, George blurts out, “Oh yeah, well, I slept with your wife!”

The room goes silent, then someone whispers to George, “His wife is in a coma.”

So, maybe we should just follow the advice our moms gave us when we were kids: If you don’t have anything nice to say, then don’t say anything until the jerk store calls. 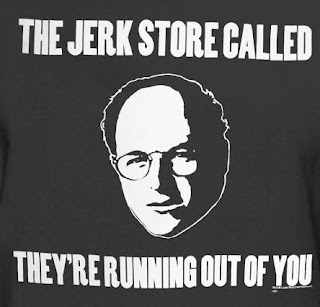