Is it OK to Clap at Mass?

Most parishes have a music ministry. And most music ministries are staffed with dedicated, hard-working, and talented people, who put in long hours and get paid very little to enhance the liturgy with sacred music.

I really appreciate church music ministries, and having been a member of a parish choir a while ago, I understand how much effort goes into preparing the music we hear at Mass. (I also appreciate that my choir director was willing to accept a baritone with a weak voice and a six-note range. I think it helped that I knew which notes to lip-sync, realizing that no sound was better than the wrong sound.)

However, I do have a couple of problems with parish music ministries. The first is that, once in a while, there will be a song that is obviously the music ministry performing for the congregation, rather than the music ministry leading the congregation in song. You can always tell when this happens because the lead vocalist starts doing some Whitney Houston or Aretha Franklin-type riffing, and the improvisational phrasing doesn’t match the notes and cadence in the hymnal. So, even if people in the congregation wanted to sing along, they couldn’t.

Every time I’ve heard one of these “performance” songs at Mass, it was done by fabulously talented singers and musicians. And you can tell it required a lot of rehearsal time. The thing is, I’m not sure music at Mass is supposed to be a “show time” event.

The other thing that kind of bothers me is when the congregation applauds the music ministry. Don’t get me wrong, many of these folks are so musically gifted they should be performing on Broadway. But again, I’m just not sure Mass is the place for that.

A website for the Catholic Answers organization posted a Q&A about this topic. The question was: “When is it appropriate to applaud at Mass?” 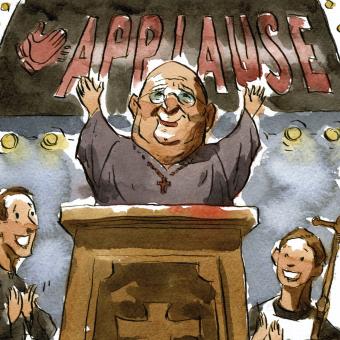 Here is their answer: “There is no Church document specifying applause as an appropriate liturgical response to music (or) singing….Now that society has generally lost the sense that applause is inappropriate in church…the Church may soon have to speak on the matter before people take the idea to its logical conclusion and begin to boo when they are insufficiently entertained at Mass.”

Back before he became Pope Benedict XVI, Cardinal Joseph Ratzinger had this to say: “Wherever applause breaks out in the liturgy because of some human achievement, it is a sure sign that the essence of liturgy has totally disappeared and been replaced by a kind of religious entertainment.”

Don’t get me wrong: I love Mass. It’s the time we draw nearest to our Lord and Savior. But if the word “entertainment” is part of the equation, Mass is always going to lose out compared to a zillion other options in our society.

I guess what’s most important here is the true purpose of the liturgy: to worship Almighty God as a community of believers. Music can inspire us and elevate our worship to a higher level. But if our focus shifts from God to the musicians and singers, then we’re not doing it right.

I have to admit, there have been times at church when the music was so amazing, I’ve wanted not only to applaud, but to shout and hold up the glowing screen of my cell phone (since nobody has a Bic lighter anymore like we used to hold up at concerts back in the olden days). 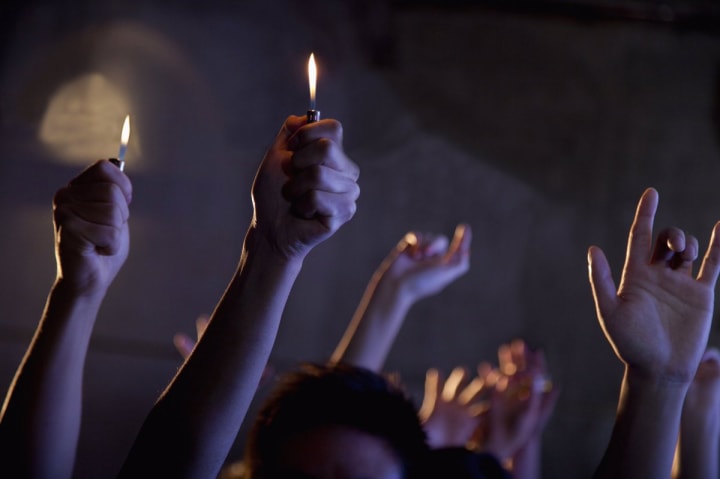 As a barely mediocre singer, I appreciate good music; I really do. But I just don’t think holy Mass is the place for talented singers to put on a show so the congregation will applaud.

However, if those parish musicians and singers schedule a concert outside of a liturgical setting, I’ll be the first in line to buy a ticket. And during the show I’ll make a lot of noise, hold up my glowing cell phone, and yell, “Encore! Encore!”
Posted by Bill Dunn at 7:57 AM