Last week while speaking at a town hall event in Iowa, President Obama said this: “Sometimes there are folks on college campuses who are liberal… who sometimes aren’t listening to the other side, and that’s a problem….I’ve heard some college campuses where they don’t want to have a guest speaker who is too conservative or they don’t want to read a book if it has language that is offensive…I don’t agree that you, when you become students at colleges, have to be coddled and protected from different points of view…. you shouldn’t silence them by saying, ‘You can’t come here because I’m too sensitive to hear what you have to say.’ That’s not the way we learn.”

Well, I’ll be darned. The president acknowledged what conservatives have been saying for years: college campuses have become so politically correct they will not allow conservative views to be heard.

A few days later, the Obama Administration’s Department of Education released its “College Scorecard,” which helps students search for schools that fit their needs. Conspicuously absent from the list were a number of conservative schools, such as Hillsdale College, Grove City College, and Patrick Henry College.

Wait. What?! The president says conservative views ought to be heard and debated on campuses, but then his own administration publishes a guide to help students choose a school and leaves conservative colleges off the list?! You can’t make this stuff up.

I realize the federal government is a massive and bureaucratic leviathan, and the folks working in the Dept. of Education are not monitoring every word the president utters. But this sure seems like a case of “actions speak louder than words.” The president offered some encouraging words, but he was probably trying to tell a certain group of people what they wanted to hear. On the other hand, the actions of the Dept. of Education demonstrate the real goal of the administration, which is: conservative views must be stifled.

So regardless of what the president recently said, don’t expect campus speech codes to be relaxed any time soon. Conservative thought is NOT welcomed and schools will continue to label as “hate speech” anything that does not conform with progressive secular ideology.


By the way, if you have kids in high school, the three schools listed above would be terrific choices. 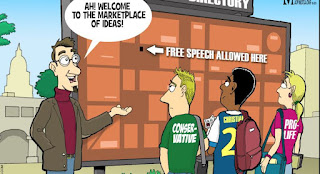