In a recent interview, President Obama lamented the checks and balances built into the American system of governance. He said, “What I didn’t fully appreciate … is how decentralized power is in this system.” He also often expresses frustration toward the framers of our constitutional system: “I am constrained by a system that our Founders put in place.”

Wait. What?! The man is allegedly a constitutional scholar. Wasn’t he a professor of constitutional law at the Univ. of Chicago? And he’s surprised that we have a system which balances the power of the Executive branch (him), Legislative branch (Congress), and Judicial branch (Courts)? This is news to him? Um, right.

And this week, a second Wait. What?! Does this mean our president really wishes he could wield dictatorial powers? A perusal of his many executive orders—some of which have been blocked by the courts as unconstitutional—would indicate the answer is: Yup. 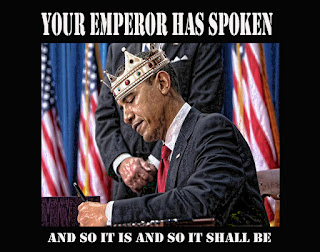