Carbs cause lung cancer? Oh my!

When I was a young man, I often proclaimed, “Beer is proof that God loves us and wants us to be happy!” Ironically, during the time in my life when I frequently uttered that statement, I was an atheist who had a severe drinking problem. Apparently, my metaphysical worldview and a notable absence of happiness did not prevent me from latching onto a clever comment.

Years later, when I became a sober Christian (not to be confused with a somber Christian), I had to modify the statement to: “Doughnuts are proof that God loves us and wants us to be happy!” 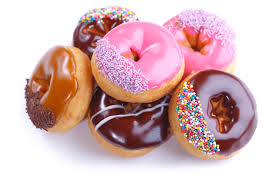 So imagine my chagrin when I read the following headline recently: “Are CARBS the new cigarettes? Experts warn carbohydrates may increase the risk of lung cancer by 49%.”

Good grief. The food nannies are at it again.

This story about carbs reminds me of one of my favorite comedians, the late, great John Pinette. John struggled with weight problems most of his life, and he often talked about the various diets he tried and the personal trainers he employed. One time a personal trainer told him if he went on a low carb diet, the carb cravings would subside after a week. John explained that even after many weeks, the carb cravings were still strong: “When you drive by a bakery and jump out of a moving vehicle, I’d call that a craving!” 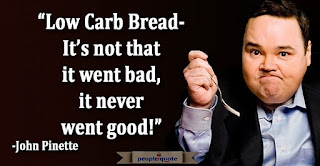 Yeah, I can relate to that. Although I have to say my carb cravings aren’t nearly as bad as John Pinette’s, since I have the willpower to wait until the car comes to a complete stop before jumping out and sprinting into the Dunkin Donuts store. (Oh, and if you see that elderly lady I accidently knocked to the floor the other day, umm, tell her I’m sorry.)

According to a report I read online (and my motto is: “If it’s on the Internet, it must be true!”), a new study conducted at the Anderson Cancer Center in Texas found a correlation between lung cancer and “high glycemic index” foods. In layman’s terms, the glycemic index is a measure of how quickly blood sugar levels are raised after eating. High G.I. foods include white bread, bagels, Russet potatoes, rice, and doughnuts.

Another statistic listed in the report: more than 150,000 Americans will die of lung cancer this year, with 12-percent of them, or 18,000, being non-smokers. Whoa, something is causing cancer to form in the lungs of those non-smokers. Could it really be carbohydrates? Darn! Why is it everything that’s good turns out to be bad? The next thing you know the health nannies will publish a report that claims the greatest cause of death is life. (“The data indicates 100-percent of those people who experience a bout of life will eventually die. We’re working hard to find a cure.”)

The report offered a list of foods with a low G.I. rating, which therefore means they are not a lung cancer risk: whole wheat and pumpernickel bread, oat bran, sweet potatoes, yams, lima beans, and lentils.


OK, I think we can work this out. When I go to Dunkin Donuts — and first, I’ll try my best to walk into the store slowly — I’ll just order a glazed pumpernickel doughnut and a sweet potato cruller. That sounds tasty (sort of). And then I’ll sing the Wizard of Oz song: “Oat bran and lentils and yams, oh my!” 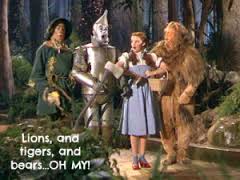