No Fun Being Seasick

I have never experienced a more miserable feeling than seasickness. (I hesitate to say it’s the absolute WORST feeling in the world, since I’ve yet to be audited by the I.R.S. or sit through one of those vacation time-share presentations.) 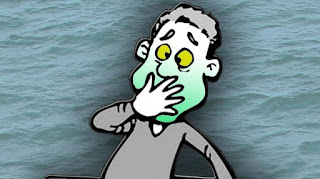 When I was about 12 years old, my father took me fishing. A half hour into our adventure, I started “chumming,” if you get my drift. I retched so forcefully over the side of the boat, my dad had to grab a net and retrieve my spleen and gall bladder before the fish got to them. (“Sit still, son, while I shove these things back inside you. And, uh, no need to mention this to your mother, OK?”)

It’s been many years since I’ve been seasick, a feat I’ve accomplish by following one simple rule: stay the heck away from boats! It took a while, but I finally discovered there is a direct correlation between seasickness and being on the water. And just in case, I composed a little ditty to help me remember this important correlation: “Stand on land and feel grand; Sail away and barf all day.”

Recently I’ve had two pleasant experiences with seasickness — pleasant because in both instances it happened to somebody else. The first situation occurred during a business conference in Virginia. After two days of meetings, it was time for some recreation. The two options were fishing or golf. Even though the weather forecast called for periodic downpours, I figured being on a golf course in the rain had to be less painful than being 20 miles offshore riding eight-foot swells. 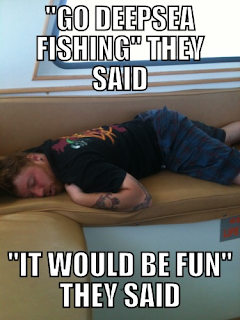 And I was right. Although I got drenched to the bone the golfing was rather enjoyable. On the other hand, the folks who went fishing had a terrible time. There were 30 people onboard, but only a couple of fish were caught during the entire trip. Even worse, the sea was so rough, two-thirds of the people got violently ill and spent most of the trip hurling their spleens and gall bladders over the rail. (The other one-third avoided this misery by leaping into the sea and begging the sharks to eat them.)

At dinner that evening, we golfers had voracious appetites, while the fishermen just sat there so pale and weak they could barely lift their forks. Which was a good thing, because after the third time I loudly sang my little ditty, “Stand on land and feel grand; Sail away…!” they tried to throw their forks at me but didn’t have the strength to reach.

The other situation occurred soon after when a co-worker went on a fishing trip with some of his customers. My co-worker got violently ill during the trip, and even called us from the boat on his cell phone to say goodbye before leaping into the sea and looking for some sharks. His customers restrained him from jumping, mostly because they were having too much fun listening to him groan and watching him deposit his spleen and gall bladder into a bucket every five minutes.

The next day when this co-worker came into the office, the rest of us were sympathetic to his plight. The moment he walked through the door, we sang a rousing chorus of, “Stand on land and feel grand; Sail away…!”


I heard that a friend of mine is trying to organize a fishing trip for later this month. If he calls looking for me, you know where I can be reached. I’ll be in Kansas. 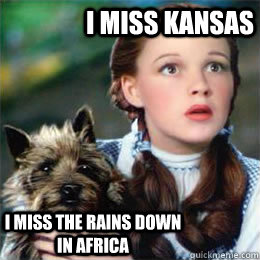