(It’s a little known fact that St. Peter kept a personal diary. He recorded detailed accounts of his years traveling with Jesus. Some biblical scholars say Peter’s diary assisted Matthew, Mark, Luke, and John when they wrote their gospels a few decades later. Others say a certain smart-aleck blogger is just making the whole thing up. Well, we shall leave it to historians to decide. In the meantime, here is what may or may not be a section of St. Peter’s diary, which discusses the event described in the gospel reading at Mass this weekend.)

He did it again. That wacky Jesus once again made me feel like a knucklehead. Why do I even hang around the guy? Is he THAT special? Well, yeah, I’m starting to think he just might be special—really special.

You remember the entry I wrote here a couple weeks ago? Jesus healed my mother-in-law of a fever, but before he did it, I really put my foot in my mouth. When he heard she was ill, he said he could cure her, and asked to see her. And of course I jumped in and yelled, “Whataya talking about? She’s sick, she needs her rest. Let her sleep, for crying out loud.” Frankly, I thought the fever was so bad she’d probably die.

Jesus ignored me and went right into her bedroom. He told the fever to get lost, and blammo!, she sat right up, suddenly in perfect health. Well, the rest of the guys were thrilled because ol’ Ma began to feed them, but I lost my appetite. Jesus really freaked me out. 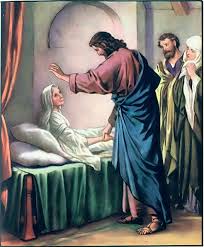 So yesterday, practically the same thing happened again! Me and my crew had been out fishing all night, and trust me, it was our worst fishing trip in years. Totally skunked. Over eight hours on the lake and not a single fish. We returned to shore, completely discouraged and began cleaning our nets. The whole time I’m thinking to myself, “How am I gonna pay these guys? They put in a full shift on my boat, but I don’t have a single fish to sell. I’ll probably have to borrow money from my mother-in-law again. Crud. I knew I should’ve put them on commission instead of salary.”

Then Jesus walks up, smiles at me, and climbs into my boat. He asks me to push the boat out a little bit, and then he sits on the bow and uses my boat as a stage to preach to the people who had gathered at the edge of the water. I’m standing there, waist-deep in the water, looking like a total doofus, trying to finish cleaning my nets while Jesus is talking away. 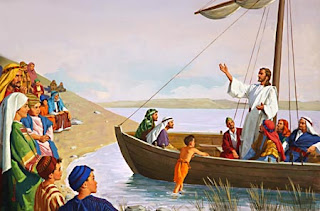 When he finished, he tells me to sail out to the deep water and put my nets down for a catch.

My first impulse was to rock the boat and dump him overboard. Then I was about to say, “Hey, wait a minute, pal! You made me look like a dope when you healed ol’ Ma, but seeing as how I don’t know jack about medicine, I guess I should’ve kept my mouth shut. But this is different. I know what I’m talking about here. I’m a professional fisherman, while you’re just a professional—um, I don’t know what you are, but it ain’t fisherman, that’s for sure.”

But then he smiles at me again with that look of his. It’s impossible to get angry at him, he’s so sincere and gentle, you know? So instead I just say as nicely as I can, “Look master, we worked hard all night and didn’t catch a single fish…”

Before I could finish with something like, “…so I appreciate your enthusiasm, but there are no fish out there today. I’m going home and get some sleep,” he looks at me again, but this time with those intense eyes, the ones that say at the same time “I love you” and “I’m not budging.” I could tell he was not going to take no for an answer. And since he did bring ol’ Ma back from the brink of death, I just shrugged and said, “…fine, if it’s your command, I’ll lower the stinkin’ nets.”

So I whistled for the crew and told them we’re going back out. As you can imagine, they were about as happy as a sheep at a wolf convention. They were already wondering how or if they were gonna be paid.

We sailed out about a quarter-mile and let down the nets. At this point we were pretty much humoring Jesus. I was already rehearsing in my head a few sarcastic comments I was going to say to him when we returned to shore empty-handed. But then, out of nowhere, we were smack-dab in the middle of the biggest school of fish I’ve ever seen. Our nets were starting to tear under the sheer weight of so many fish. We called to another boat to come help. In 20 minutes we filled both boats to the point where one more minnow would’ve sunk us. It was unbelievable! The greatest catch of fish in my entire life, and probably in the entire history of this lake. 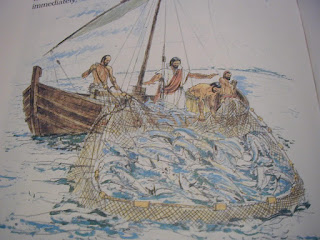 We were absolutely joyful and exhausted as we slowly made our way back toward land. No loan from ol’ Ma this time! And I’m so glad the guys are on salary instead of commission! I think I might give them a bonus anyway.

Then I looked over and saw Jesus staring at me. He had that weird smile again. Then it hit me, like getting smacked in the face with a cold mackerel. He knew. Just like he knew how to command a fever to leave ol’ Ma’s body, he knew exactly where the fish were. I think he somehow even commanded the fish to jump right into our nets.

I was gripped with fear. Jesus is not an ordinary preacher or physician or even professional fisherman. He is much more. He’s a mystic, a prophet, a guy with an inside pipeline directly to the Almighty Creator. I suddenly felt unworthy to be in his presence. I said, “Depart from me, Lord, for I am a sinful man.”

Jesus just smiled again and said, “Don’t be afraid. From now on you will be catching men.”

OK, so what does THAT mean?


Well, I made so much money selling that huge catch of fish, I can afford to shut down the fishing business for a few weeks. I think I’ll follow Jesus for a while and see what happens. I wonder if we’ll end up doing anything interesting?
Posted by Bill Dunn at 3:43 PM