Ever since the apostle Simon Peter enrolled in M.I.T. (the Messiah Institute of Theology), he had been one of Professor Jesus’ favorite students. “The boy’s a bit hard-headed,” Jesus would comment in the faculty lounge, “but he’s got a heart of gold. I expect great things from him.”

Peter wasn’t the smartest kid in class, but he tried really hard. He always took notes and asked lots of questions. Then Finals Week arrived. Peter’s whole grade was riding on this one exam.

When the time came for the test, Peter was shocked. It was nothing like he had imagined. He had heard from other students that Jesus’ exams usually consisted of essay questions. This exam, however, only had three fill-in-the-blank questions. 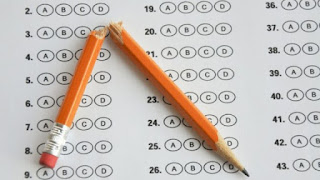 Peter, never very comfortable taking exams, started to sweat. His mind began to race, then it went blank. He looked around the room and saw the other students writing away. Slowly, with his hand trembling, he reached inside his tunic for a Number 2 pencil.

“OK, calm down,” Peter said to himself, “You know this stuff, just relax.”

He slowly read the first question: “You also were with Jesus of Galilee, weren’t you?”

Peter felt panicky. “What’s that supposed to mean?” he thought. He chewed the eraser of his pencil and then wrote down an answer: “I don’t know what you’re talking about.”

He read the second question: “You were with Jesus of Nazareth, right?”

Peter shook his head in bewilderment. “After all these years,” he muttered, “I, I really have no clue about Jesus.”

He wrote down his second answer: “I don’t know the man.”

Then he read the third question: “Surely you are one of them, for your accent gives you away.”

Peter’s eyes became misty. “That’s not even a question!” he moaned out loud, causing other students to look at him. In complete frustration, he cursed and swore and scribbled down his last answer: “I don’t know the man!” 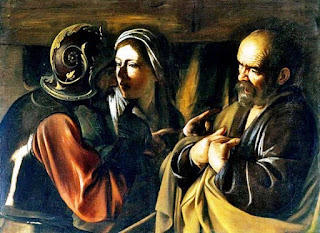 Then Peter jumped up, strode to the front of the room, and slapped his paper down on the teacher’s desk. Just then, a rooster crowed outside the classroom window. Peter ran from the room in tears.

Professor Jesus was not surprised. He knew in advance Peter was going to flunk the test. That’s because it was not so much a final exam as it was a final lesson. By bombing the test, Peter’s pride and ego were sufficiently deflated, and now he was ready for the real final exam.

In the gospel reading this weekend, Professor Jesus gave Peter his make-up test. Again, there were three fill-in-the-blank questions. The first: “Simon, son of John, do you love me more than these?”

Peter hesitated, then answered: “Yes, Lord, you know that I love you.”

Second question: “Simon, son of John, do you love me?”

Second answer: “Yes, Lord, you know that I love you.”

Third question: “Simon, son of John, do you love me?”

Simon Peter’s mind was racing once again. “He’s asked me the same question three times,” he thought. “What does he want me to say?!” 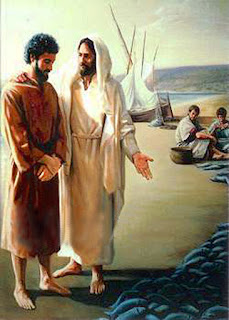 Peter could feel sweat form on his forehead. He felt the urge to run away in frustration again. But he thought a little more. “Look, I obviously don’t understand much of what Jesus has been teaching. But I do know some things for sure: Jesus is the Son of God, and I love him. So I’m gonna stick with what I know.”

He took a deep breath and spoke his final answer: “Lord, you know everything; you know that...I...love...you.”


Jesus smiled and grabbed Peter’s right hand, shaking it heartily. He then placed a diploma in Peter’s left hand. “Congratulations. You have earned your Master’s Degree in Servanthood. Now go and feed my sheep.”
Posted by Bill Dunn at 6:46 AM