Revealed Secret Cuts Me to the Quick

I’ve been trying to keep this a secret. Certain information is rather personal and simply should not be made public. But at a 4th of July picnic last month, I was, as the saying goes, “feeling no pain.” (No, I didn’t fall off the wagon and once again start drinking vodka from a mason jar. I ate four hotdogs and a tin of brownies.) And I let it slip out that I cut my own hair.

Other partygoers became curious and began peppering me with difficult questions, such as, “Why?” “How?” and “Ohhh, that explains a lot.” (Technically not a question, but it was the most popular reaction that day.)

Then I really blundered by letting it slip out that the exact method I use to cut my hair is the one-and-only “Flowbee” device. 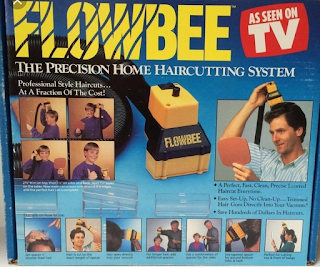 If you’re not familiar with the Flowbee, it was hilariously mocked in the movie “Wayne’s World” as a product called the “Suck Kut,” with the marketing slogan, “It sucks as it cuts!” (Prompting Wayne to add, “It certainly does suck.”)

The Flowbee is basically a miniature hedge clipper with a hose that attaches to your vacuum cleaner. The suction pulls your hair away from your scalp, and as it is cut by the clippers (your hair, I mean, not your scalp — at least most of the time), it goes right into the vacuum bag so there is nothing to clean up. The key to the product is an assortment of rectangular plastic spacers that snap onto the clipper side of the unit, allowing you to set exactly how much hair is trimmed off.

I know for a fact that these spacers are the key to the product because a few years ago I forgot to snap them onto the clipper, and when I turned on the vacuum cleaner and started cutting, the blades were only about an eighth of an inch away from my scalp. Before I realized what was happening the left side of my head looked like it had just begun Marine Corps boot camp.

At that point there was nothing to do except cut all my hair to match the boot camp stubble, and I spent the next month looking exactly like Curly from The Three Stooges, only not quite as handsome. 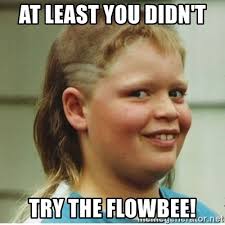 When asked why I would cut my own hair with such a hokey, late night infomercial product, I replied, “Do the math. My Flowbee cost 70 bucks twenty years ago, and if you figure the average haircut costs around $25, about once per month, multiplied by twenty years, um, carry the five, move the decimal point, it has saved me, uh, over six million dollars!”

“No, Bill,” someone said, “That would be about six thousand dollars.”

“Yeah,” someone else chimed in, “but for twenty years you’ve been walking around with one of those early 1980s, East German gymnastics coach-style clunky haircuts. How can you put a dollar value on humiliation like that?”

“See, that’s where you’re wrong!” I declared defensively as they all laughed. “I am, if you haven’t noticed, a guy. And guys don’t care about hair — unless it all falls out. We don’t care if it turns gray, we don’t care if it’s combed, we just want it to be there, on our heads, and occasionally cut. Now leave me alone!” 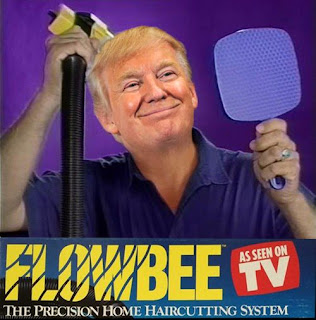 Seeing how upset I was, one friend finally said, “Look, Bill, if it’ll make you feel better, we’ll all pitch in and buy you some real haircuts for the next few months.”

“No,” I replied, “My Flowbee is fine. But if you want to make me feel better, bring me another tin of brownies.”