Is Blindness Punishment For Sin?

In John’s gospel, chapter 9, we read the fascinating story of a man born blind who was healed by Jesus. At the very beginning of this episode, Jesus’ disciples asked Him, “Rabbi, who sinned, this man or his parents, that he was born blind?”

The conventional wisdom back in biblical times was that illnesses and birth defects were inflicted by God as punishment for sin. Stop and think about that for a minute. Imagine that you have a disability, such as blindness or a missing limb or the inability to walk. Even if you have loving family and friends to assist you, your day-to-day life is a real struggle. But then add to that scenario the fact that everyone in your community is convinced your disability is punishment for something terrible you’ve done. Whoa! Talk about miserable!

Can you imagine how awful that must’ve been back then? I suspect the physical difficulties were dwarfed by the heartache of receiving zero empathy or understanding from all of the villagers.

In answer to the disciples’ question, Jesus explained that neither the blind man nor his parents sinned. Then He miraculously restored the man’s sight, and the subsequent interplay between the healed man and the Pharisees is fascinating. Go read it sometime.

But let’s get back to the idea of assuming physical disabilities are divine punishment for sin. As Christians living in the modern, scientific world, we know nowadays that God’s awesome creation is filled with a lot of uncertainty and randomness. God created the world “good,” but once sin entered into the picture, physical corruption and death followed. So we live in a wonderful yet fallen world, and our understanding of genetics, probability, and statistics makes it clear that accidents do happen. These accidents have nothing to do with a person’s moral character. It’s just, well, bad luck.

In God’s mysterious plan for the world, bad stuff happens to good people and we are called to rely on God’s mercy and grace to deal with whatever problems confront us. This would be quite depressing if our life on earth was all there is. However, the reward of eternal joy in Heaven will make all the struggles here seem minor.

So, living on this side of eternity, here in our fallen world, certainly can be filled with pain and suffering. But at least nowadays we no longer blame afflicted people for their disabilities.

2) How about the many people in our society who struggle with drug and alcohol addiction? They lose a job or lose their driver’s license, and people quickly mutter to themselves, “Hey, if you just had some willpower, your life wouldn’t be such a mess.” No thought, of course, is given to what it’s actually like to struggle with a chemical addiction, nor the fact that some people are genetically predisposed to become addicted more easily than others.

3) Here’s another one: people who get diagnosed with heart disease or diabetes. No doubt many people think to themselves, “Hey, if you didn’t eat like a pig for the last 40 years you wouldn’t have gotten sick.”

Yes, we modern people are very understanding, aren’t we? We’re nothing like those hard-hearted folks in the first century. Yeah, sure.


Maybe it’s time to be honest about our supposed “enlightened” attitudes nowadays. Maybe it’s time we show a bit more compassion and mercy to those who struggle with various afflictions. Because you never know, God might strike us blind as punishment for our sinful and hard hearts. 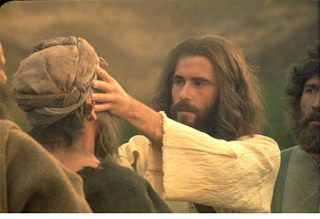