Thoughts About Me And ‘Eww’

In mid-August it was announced that musical legend Billy Joel became a father for the second time. His fourth wife Alexis gave birth to a healthy baby girl. Alexis is 33 years old and Billy is exactly twice her age, 66. The celebrity gossip shows immediately gushed with congratulations for the new parents. When I heard the news, however, I instinctively cringed and said, “Eww!”

And then I immediately felt guilty for reacting that way. It’s none of my business what a famous singer-songwriter — who I’ve never met and will never meet — does in his personal life. So what if a 66-year-old man fathered a child with a 33-year-old woman? In this case, at least the child won’t struggle financially. Good for them. On the other hand, “Eww!”

I guess it just strikes me as a bit abnormal. First, there is the whole phenomenon of the “trophy wife,” when a successful middle-aged man marries a gorgeous woman half his age. I prefer the concept of loving spouses who grow old together. That’s kind of hard to do when one spouse already is a senior citizen on the wedding day, while the other spouse still hasn’t reached the age to be invited to her 10th high school reunion. It seems a little unnatural to me when a guy marries someone who wasn’t even born at the time of his first marriage.

Of course, the whole trophy wife thing is not new; it’s been going on for centuries, especially with kings and emperors. Since we don’t have a monarchy in America, Hollywood stars and musical celebrities have become our culture’s version of royalty.

I think the first historical example of a trophy wife dates all the way back to the origins of mankind. After being expelled from the Garden of Eden, Adam and Eve’s relationship soured, and he finally dumped her and took up with a young flight attendant he met during a business trip to San Diego. At least I think that’s what happened. I might be confusing this with the plot of a movie I saw a while ago. I’d better check my Bible.

Anyway, trophy wives are one thing, but becoming a father in your 60s is quite another thing. “Eww!” (Oh sorry, I couldn’t help myself. That just came out. I’ll try to refrain from any more eww outbursts.) To me, it doesn’t seem quite right to be searching for a quality daycare center for your child at the same time you’re searching for a quality assisted living center for yourself.

Just do the math. When Billy Joel’s new daughter is in third grade, he’ll be 73. Those parent-teacher meetings are going to be so weird. When the young girl is in high school, Billy will be in his 80s. And when his daughter is ready to be walked down the aisle, Billy will be, um, most likely long gone.

While pondering this topic, in the back of my mind I kept hearing the words: “Felix Unger.” I had no idea why my brain was telling me that, so I looked up online and discovered that Tony Randall, the actor most famous for playing the character Felix Unger in the TV show “The Odd Couple,” got married when he was 75 years old to a woman who was 25. They had two children together, the second when Tony was 79. “Eee— Eee— Eee— Stop it!” OK, good, I was able to keep myself from saying it.


Again, I feel guilty that this topic makes me cringe. It’s none of my business. God bless them. Oh, while searching online I discovered author Saul Bellow became a father at age 84. “Eww!” 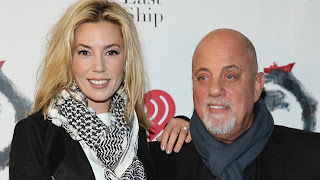