Last week’s column discussed the Metric System. When I was in high school during the 1970s, it was announced the Metric System soon would become the standard in the United States. Our teachers began to instruct us in new units of measure: meter, liter, and speeder; gram, kilogram, and graham cracker; centigrade, renegade, and Minute Maid. My science teacher said, “No centigrade, no passing grade.”

However, the U.S. never adopted the Metric System. I mentioned last week that I’d explain this week why the conversion never took place, figuring a full week would give me time to look up the answer on Google.

Boy, was I mistaken. The story of why the U.S. never switched to Metric is not only fascinating, it’s also very complicated, spanning more than 200 years (or 4500 centipedes, in Metric). I only have room here to hit the highlights, but I encourage you to go online and search this phrase: “Why the U.S. never switched to Metric.” Just be warned, you’ll run into a lot of comments such as, “Are Americans stupid, or just stubborn?” 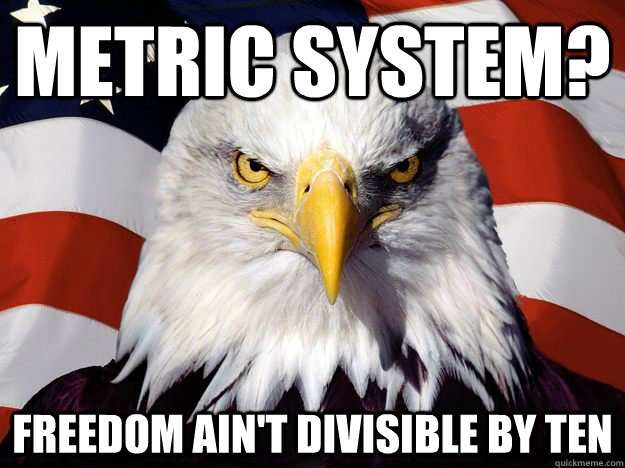 The Metric System was developed in France in the late 1700s to standardize weights and measures. Up until then, there were thousands of different opinions of what constituted, say, a bushel or a foot, which caused lots of disputes when engaging in commerce and especially when hiring a guy to build a deck on the back of your house. “Hey, Pierre, I said I wanted the deck to be 30 feet long!” “Oui, monsieur, it is. Thirty feet on MY tape measure. Ha ha! Pay up!”

The French decided a meter was exactly one ten-millionth of the distance from the North Pole to the Equator. Of course, no one back then had a clue what that distance might be, nor did they have any way of measuring it, but they did settle on a fairly uniform standard.

In 1971, The U.S. Congress published a report titled, “A Metric America: A decision whose time has come.” The report recommended the U.S. convert to Metric within 10 years. I suspect this is what prompted my high school teachers to throw away their yardsticks and start whacking our knuckles with meter sticks. 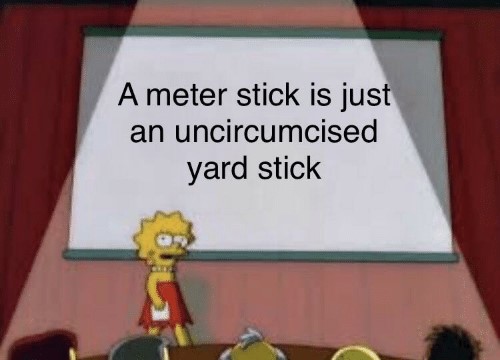 But by the time President Gerald Ford signed the Metric Conversion Act in 1975, it had been watered down so much, it said Metric conversion is encouraged but voluntary. Well, if it was voluntary, guess who decided to stick with inches, feet, ounces, and pounds? Yup, us.

The oddest aspect of the story occurred way back in 1793. A French aristocrat, Joseph Dombey, set sail for America to meet with Secretary of State Thomas Jefferson, to show him a rod that was exactly one meter long and a copper cylinder that weighed exactly one kilogram. Both Jefferson and President George Washington were very interested in establishing a uniform system of weights and measures for the U.S.

However, Dombey’s ship was blown off course by a storm and then seized by Carribean-based pirates. The unlucky Frenchman died in captivity and his Metric samples never made it to America’s founding fathers. A chance to go Metric at the very beginning of our nation was lost. Can you believe it? Our country is not Metric because of pirates!

What does the future hold for the Metric System in the United States? Well, many industries here are already using it, such as automotive, food processing, and drug dealers. There’s so much more to discuss, but we’re out of space in this brief column of 600 words (or 86 decibels, in Metric). 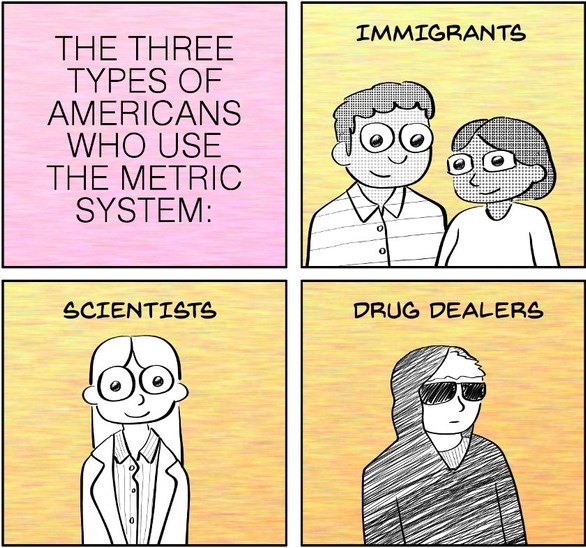 To summarize, we can say America is slowly embracing the Metric System, one inch at a time.