A ‘Moving Party’ Is Anything But a Party

Recently I was reminded of an immutable fact of life: moving stinks.

Most of the time when someone moves, it’s an exciting new chapter in their life: a new house, a new city, a new job, etc. And yet, the process of making the move simply stinks. (I’m trying really hard not to use a different word, but since this is a family newspaper, the word that pops into my head most readily — along with a trusty profane adverb — will get flagged by the editors, so I’ll stick with “stinks.”)

I only experienced that once, and at the time I was drinking so much I didn’t realize I was supposed to be embarrassed. Right after I graduated from college, I got a job and rented an apartment with a friend. A while later, I was dismissed when I got caught drinking on the job. (I described that incident a bit differently on my updated resume.) Since I couldn’t pay my share of the rent anymore, I had to move back into my parents’ house. Boy, were they thrilled. 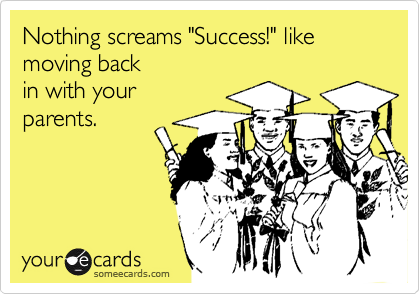 Anyway, my recent experience with moving was a joyful and exciting occasion: the purchase of a new home by a close family member. But the actual moving part stunk (or is it stank? If they’d let me use my profane word, which is not classified by grammarians as an irregular verb, there would be no confusion. Outrage, yes. Confusion, no).

There are two primary ways you can move, and both of them stink. The first way is to bite the bullet and hire a moving company. This method often costs as much as three mortgage payments, but at least it keeps you from having to carry heavy furniture up a flight of stairs. It does not, however, keep you from cringing every time the moving guys smash a four-drawer bureau into the wall, or scrape the varnish off a stair railing with a metal bed frame. For the amount of money moving companies charge, they ought to throw in a free can of spackle or touch-up paint with every job, because you’ll be needing it for a full month after they’re gone.

The other way to move saves lots of money, but it loses lots of friends. It’s the good ol’ “Hey, I’m having a moving party on Saturday!” technique, where you promise all your friends and co-workers unlimited pizza and beer if they’ll stop by on Saturday at 9 a.m. — with, of course, their pick-up trucks — and help you move “a couple of things.” Never in the history of human language has the phrase “a couple of things” be so misapplied. 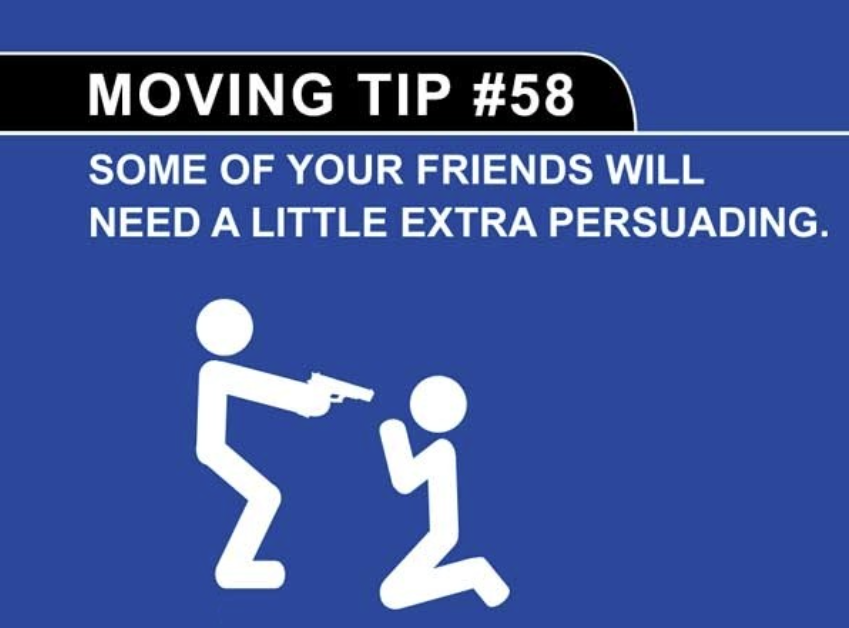 By 5 p.m. on Saturday, after one small pizza and a six-pack of warm beer, you begin to realize you now have exactly zero friends, plus half of your stuff still has not been moved.

The process of moving is stressful and frustrating and expensive — in other words, it stinks. Despite the genuine trauma of moving, you can count yourself lucky if ALL of your possessions actually show up at your new place. (Did you ever drive down the highway and see a mattress or chair or coffee maker by the side of the road? Yup, that stuff accidentally flew out of the back of somebody’s friend’s pick-up truck.) 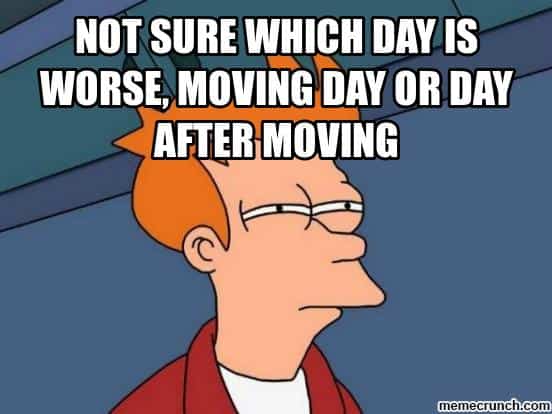 The most joyous statement in the whole English language is, “We’re all done moving!” And the most frightening statement is, “Hey, I’m having a moving party on Saturday!”
Posted by Bill Dunn at 3:57 PM