These statements are told to us by many wise modern philosophers, including animated cartoon characters from that old Disney movie “The Lion King,” who explain that we are all a part of the great “circle of life,” where each generation has to move aside and make way for the next generation.

Death is just a normal part of life, right? Well, tell that to Jairus, the man we read about in this week’s gospel, as his friends come to tell him, “Your daughter has died; why trouble [Jesus] any longer?”

Sure, just tell Jairus that death is perfectly natural. Sing the circle of life song for him. Oh well, a dead child? You’ll get over it. C’mon Jairus, let’s go have some lunch.

Well, I suspect we are constantly told this “death is natural” view to keep us from becoming despondent at the death of loved ones, and to keep us from being terrified by the thought of our own death. However, the idea that “death is just a part of life” is the farthest thing from God’s view. God did not create life just so it ultimately could wither away and die.

For the weekend of June 27/28, the first reading at Mass is from the Book of Wisdom in the Old Testament. We read: “God did not make death, nor does he rejoice in the destruction of the living….For God formed man to be imperishable; the image of his own nature he made him. But by the envy of the devil, death entered the world.”

This idea is also confirmed in St. Paul’s letter to the Romans. Paul wrote that “sin came into the world through one man (Adam), and death came through sin, and so death spread to all because all have sinned” (Romans 5:12). Death was not, and has never been, a part of God’s plan for mankind. Death is an abomination; it is an obscenity; it is a curse.

Death first came into the world, and corrupted God’s perfect creation, when Satan tempted Adam and Eve to sin. This gives us an idea of just how powerful and far-reaching sin truly is; it can send a shock wave throughout the entire natural order. Remember THAT the next time someone tries to tell you that sin is just an old-fashion concept. On the contrary, sin is real, and it screws up everything!

Up until about a decade ago, we Boston Red Sox fanatics had a rallying cry: “Reverse the Curse!” This referred to the so-called “Curse of the Bambino,” the idea that the late, great Babe Ruth had cursed the Red Sox never to win the World Series as punishment for trading him to the rival New York Yankees. At times, it certainly seemed as though this curse was real. It took 86 years, but the Sox finally reversed the curse in 2004. (No, I wasn't alive for ALL of those 86 years—it only seemed that way.)

The reason Jesus came to earth was to reverse the curse—the curse of death. His sacrificial death on the cross once and for all paid the price for the entire world’s sins. And His rising from the grave three days later conquered death. What Satan had gleefully unleashed in the Garden of Eden, Jesus reversed on Calvary.

So even though we still have to deal with death on this side of eternity, death no longer has the final word. Jesus changed all that.

Death is still painful and horrific, and anyone who tries to cheer us up with that “death is just a natural part of life” nonsense—whether a well-meaning friend or a philosophical Disney cartoon character—should be politely ignored.


Death is painful, but it is no longer hopeless. Jesus changed all that. The curse has been reversed. Thank God! 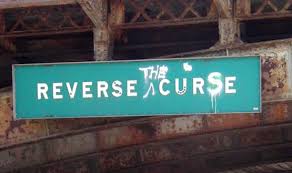