Treadmills Are Too Dangerous

There was a front page newspaper story a few weeks ago about treadmills. No, I don’t mean the emotional lament type of “treadmill,” as in, “My job is so tedious, it’s like I’m stuck on a treadmill.” Or the Elton John song about Marilyn Monroe: “They set you on a treadmill, and they made you change your name.”

I’m referring to the treadmill type of treadmill, the exercise machine with a moving platform, on which you walk, jog, or run. And when I say “on which you walk, jog, or run,” I definitely mean YOU. Personally, I avoid treadmills like the plague. (On the other hand, how many people actually seek out the plague? What a weird figure of speech.) I already do enough walking — around parking lots trying to remember where I parked my car — enough jogging — to the front door of Dunkin Donuts so I get in line ahead of the two other people merely sauntering toward the entrance — and enough running — up the sidewalk of the highway rest area facility and then into the men’s room, because I didn’t stop at the last rest area 24 miles ago, temporarily deluded into thinking I still possessed a young man’s bladder.

So, regarding the idea of purposely stepping onto a machine so it can force me to huff and puff for 45 minutes, forget it. But many people swear by treadmills (and I suspect many people swear AT treadmills). Reportedly, it’s a great way to get a good workout without having to go outside for a run, especially in these parts where it seems the earth is covered in snow and ice for at least 14 months out of every year. Even during those brief periods when the weather actually is nice, the odds are good some motorist will be distracted by his cell phone and turn an unsuspecting jogger into a new hood ornament.

But if you think treadmills are a safe way to get a good workout, think again. The article in the newspaper — remember the newspaper article I mentioned in the first sentence, about 19 thought tangents ago? Well, don’t worry, I didn’t forget — explained that treadmill related injuries cause more than 24,000 emergency room visits per year.

Stop and think about that for a moment. Twenty-four-thousand! Every year! (I’m pretty sure it’s not the SAME 24,000 people each year, since a treadmill injury trip to the E.R. most likely would cause a person to try a safer exercise routine in the future, such as jogging blindfolded in the middle of I-84 during rush hour.)

Now, I’m not an expert on emergency room statistics, but in my family we reserve the E.R. for situations with broken bones, lots of blood, or concussions so severe you think you’re a former quarterback for the Chicago Bears. This means that far MORE than 24,000 people get injured each year on treadmills. If someone stumbles and falls off a treadmill, and only sprains an ankle, or scrapes a knee, or chips a tooth, he’ll limp around the house for a few days with an ice bag, but won’t become an official entry in the massive database of the federal government’s Office of Treadmill Death and Dismemberment, a sub-division of the department of Health and Human Services.


If you ask me (and I know you didn’t actually ask me, but it’s time to wind up this rambling essay seemingly composed by a former quarterback for the Chicago Bears), treadmills are simply too dangerous. If you insist on exercising with a treadmill, please at least do this: never turn it on. Just stand on it and watch your favorite show on TV. The whole point is to be healthy, right? 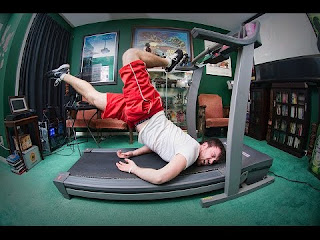