So, what’s new in the Catholic world these days? Well, a recent survey found that 7 out of 10 Catholics do not believe the Eucharist is the real body and blood of Jesus. Instead, these 70% of American Catholics think the Eucharist is just a symbol, which directly rejects 2,000 years of Church teaching.

Also, in recent weeks, the head of the Jesuit order said that Satan is not real. Fr. Arturo Sosa, SJ, the Superior General of the Jesuits, said, “The devil exists as a symbolic reality, not as a personal reality.” This view, too, rejects 2,000 years of Church teaching. 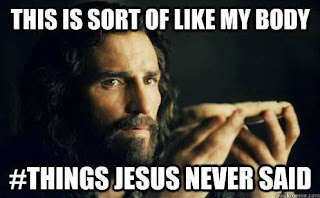 Hmm, seems like there is a lot of confusion these days about what is and is not a symbol. Now, don’t get me wrong. Symbols are very important, and our Christian faith tradition uses symbols and symbolic language all the time. And don’t forget, Jesus frequently taught using parables and analogies, which often used symbolism to make key points.

But here’s the thing: if we take firm, fundamental doctrines and reduce them to mere symbols, we drain all the power and meaning out of them.

From the very beginning of Christianity, 20 centuries ago, the Church taught and the faithful believed that Jesus’ body and blood truly become present when the priest consecrates the bread and wine. Can we possibly explain in scientific terms how this happens? No, of course not. It’s an article of faith, and we believe it’s true because Jesus said so.

The gifted 20th century author Flannery O’Connor commented on this in her typical blunt way. If the Eucharist is not the real body and blood of Christ, she said, “Then to hell with it!” 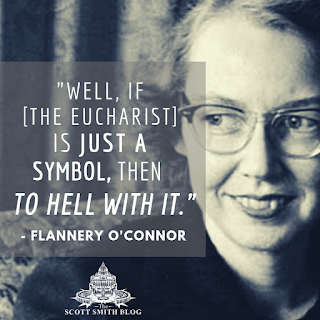 During the past couple of generations, Mass attendance has dropped in the United States approximately 70%. Gee, I wonder if that has anything to do with the fact that 70% of Catholics do not believe in the Real Presence of the Eucharist. Just sayin’.

If someone truly, truly believes in his heart that the body and blood, soul and divinity of Jesus Christ becomes present at Mass in the elements of bread and wine, as a result of a supernatural miracle of God, then that person would never miss Sunday Mass. But if he thinks the bread and wine are just plain old bread and wine, and merely symbolize something or other about Jesus, then he’s not going to be too bothered if he misses Mass once or twice or a hundred times.

Regarding whether or not Satan is a personal being, the statistics are even worse. A recent survey indicates that 83% of Catholics agree with the head of the Jesuits: the devil does not really exist. But again, Scripture and the words of Jesus are very clear: Satan is a fallen angel who rebelled against God and was cast out of Heaven, and now he prowls about the world seeking to devour innocent human souls.

If we don’t believe what the Church teaches about Satan, we are not going to be aware of his sneaky attacks and temptations. And if we don’t regularly fill ourselves with a supernatural power to resist the devil—primarily by receiving the Eucharist—our souls are ripe for the picking. 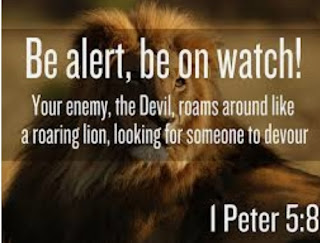 Let me remind you of two important truths: being separated from the love of God is extremely painful, and eternity is a really long time.

Please don’t fall for the symbolism fad. The Eucharist IS the body and blood of Jesus. And Satan IS an evil personal being. Jesus clearly taught this, and the sooner we embrace these truths the sooner we can be victorious in the ongoing spiritual battle.