Recently I found an old issue of “Bloomberg Businessweek” magazine, and the main theme that week was “Trouble at the Office.” Most of the articles were inspired by readers who complained about problems in their workplaces. And many of those problems dealt with bad bosses. Some of the articles were titled, “Toxic Bosses,” “How to Live with the S.O.B.,” and “Are You Being a Jerk…Again?”

Most of the bosses in the articles were portrayed as a combination of pure incompetence, similar to the clueless boss in the Dilbert comic strip, and pure evil, similar to Nasty McGillicuddy, a kid I knew in the 6th grade who liked to torture helpless creatures, such as frogs, cats, and 5th graders. 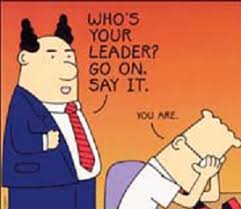 The primary tone of the articles was something along the lines of: You should try to learn coping skills to keep your boss from getting under your skin because you’ll probably get caught if you kill him, even if the cops never find the body. The magazine seemed to imply that all bosses in all organizations throughout all of history have been and continue to be sadistic slave drivers.

And, of course, this is quite true. The very nature of the boss-worker relationship guarantees acrimony and hard feelings. This is because the boss needs the employees to work harder and to be more productive than the employees think necessary. Just imagine all those times you told your teenage children to clean their rooms. Your definition of “clean” meant clean, while their definition of “clean” meant not quite condemned by the Board of Health. Now just imagine every time you had those conversations with your kids, they were defended by a team of O.S.H.A. bureaucrats, workplace attorneys, and labor union officials. It’s enough to turn any parent into Dilbert’s pointy-haired boss — or Nasty McGillicuddy.

It’s easy to bash bosses since they have more power, they make more money, and they can leave in the middle of the afternoon to play golf “with a customer.” (You always make little air quotes with your fingers when saying “with a customer,” which is office code for “most definitely NOT with a customer.”) 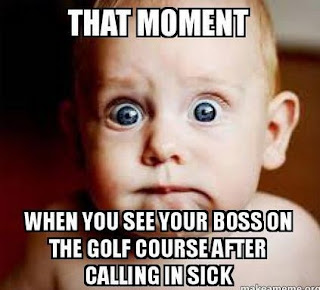 For many years during my work career I was the direct supervisor of other employees. For a while I was the manager of a department of about 20 people in a factory. Then I was the supervisor of six people in a sales office. Let me tell you, there was nothing whatsoever good about being the boss — as long as you don’t count more power, more money, and leaving in the middle of the afternoon to play golf “with a customer.”

It’s been quite a while since I’ve been the direct supervisor of anyone, and that’s just the way I like it. The main problem with being a boss is that, unless you are the C.E.O. of the company, you are being supervised by an even higher up boss. And your job performance is based exclusively on how much blood, er, I mean, work, you can squeeze out the employees under you.

It’s a no-win situation for a boss. If the boss tries to be a decent guy and treat the workers nicely, then his higher up boss will come down on him like a ton of bricks. If he wants to please his higher up boss, then he has to crack the whip. 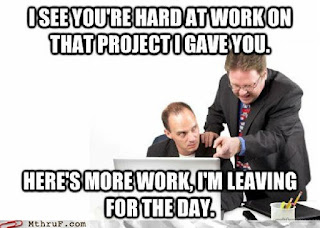 If you think your boss is a total jerk, please cut him some slack. Who knows, he might be getting dumped on by his boss, and in reality, he’s only a partial jerk. However, if your boss is named Nasty McGillicuddy, I suggest you turn and run as fast as you can.