Hi guys! It’s that time of year again for the annual Connecticut Catholic Men’s Conference. This day-long conference will be held once again at St. Paul’s High School, 1001 Stafford Ave., in Bristol, CT. The date is Saturday, October 19th, 2019, and the time is from 8:30 a.m. until the conclusion of Vigil Mass at about 5 p.m.

It you’ve attended the Men’s Conference in the past, then you already know it’s a wonderful opportunity to renew your faith life and connect with hundreds of other guys who are trying to do the right thing and be faithful in our confused and faithless society.

If you’ve never attended the Men’s Conference, let me try to explain why it’s so important that you attend this year. First, we have to understand that our modern American culture—including and especially our Church—is having a crisis of masculinity. We hear a lot these days about “toxic masculinity,” as personified by Harvey Weinstein, Jeffrey Epstein, and many other men whose behavior was exposed during the “Me too” frenzy a couple of years ago. Treating women as sexual playthings obviously is not Godly masculinity; it’s just being a selfish creep. 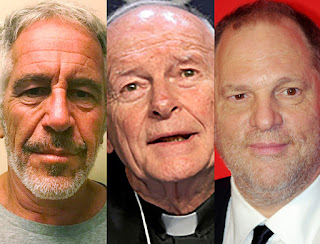 On the other hand, our Church for many decades now has been noticeably feminized. The majority of people who attend Mass on a regular basis are women and children. And in the wake of the Theodore McCarrick scandal last year, we’ve learned that a huge percentage of our clergy would rather, um, let me see if I can phrase this correctly, would rather make a kale salad with cranberries than throw a football out in the yard.

I’m certainly not saying that our priests and bishops ought to be crude beer-chuggers who drive pickup trucks into the woods and hunt bears. (Although if some of them did that, it would be kind of cool.) I’m just saying that when you think of occupations that are “ruggedly masculine,” the Catholic priesthood is way down on the list.

To have the proper balance of masculine and feminine traits in our Church, the needed boost of additional testosterone is going to have to come from the laity. And that’s where the Connecticut Catholic Men’s Conference comes in. The theme of this year’s Conference is “Forge Your Path to Holiness.” The organizers of the Conference specifically chose the word “forge” to invoke the image of St. Michael’s sword.

Yes, I know. The thought of a weapon, whether actual or symbolic, makes many folks faint with fear nowadays. But let me try to clarify: Being a spiritual warrior does not mean you wield power over others and dominate people for your own selfish gain. Being a spiritual warrior means you are willing to defend your family and your Church and your community against the forces of evil. 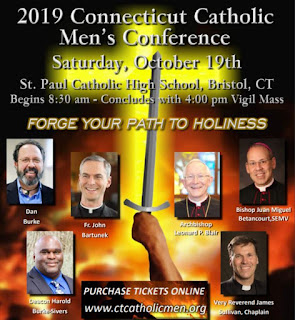 (By the way, it’s very fashionable these days to downplay the concept of evil, and instead claim the real problem is that people occasionally make poor choices. Hmm, that kind of thinking must be the result of too much kale and cranberries. The fact is, evil is real, and it’s our duty to fight against it.)

When you spend an entire day with fellow Catholic men—listening to great speakers, enjoying the food and fellowship, receiving the sacraments of Reconciliation and Eucharist—you will get a booster shot of courage, strength, and holiness. You will be filled with Catholic masculinity. 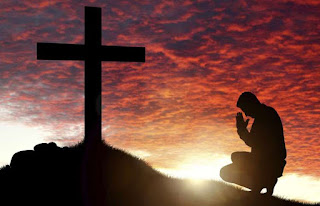 Please check out the website: CTCatholicMen.org , where you can learn more about the Conference and register. I hope to see you there, guys. And I’ve got it on good authority that there will be no kale and cranberries at the Conference.

(For a chuckle on this topic, see: https://babylonbee.com/news/least-masculine-society-in-human-history-decides-masculinity-is-a-growing-threat )