Goofy Is Better Than Grumpy

I have to make an important decision soon, and I hope I make the right choice. In just a few years it will be time for me to be either a Grumpy Old Man or a Goofy Old Man. Having been in the presence of many Grumpy Old Men during my life, I hope I choose the other path.

To be a Goof rather than a Grump will require a lot of willpower, since I’ve heard the aging process reduces the body’s natural defenses against a case of crotchety-itis.

When I hit that age, I want to spend a lot of time walking around the neighborhood in just my bathrobe and slippers, waving hello to everyone I see. As the terrycloth belt of my bathrobe gets looser and looser, the neighbors will wave back with a nervous smile and think to themselves, “I wonder if he’s wearing anything under that robe?” (Don’t worry. I’ll have on my Red Sox gym shorts. I want to be a G.O.M. not a D.O.M.)

The key to being a proper Goofy Old Man, I think, is going to be my cane. I don’t actually need a cane right now, but the way my knee feels nowadays, I’m sure I’ll need one soon — possibly by the time you finish reading this essay.

Anyway, a cane is a perfect prop for G.O.M.P.A. (Also known as Goofy Old Man Performance Art.) For example, a cane is ideal for playing air guitar, and I want to make sure I can nail the opening riff of “Smoke on the Water.” And if that Deep Purple classic is not actually playing at the moment, then I’ll just sing it out loud with a nasally, “Nayhrrrt nayrr-nayrrrrr, ner-nerr nay-nayrr. Nayhrrrt nayrr-nayrrr, nayr-nayrrrr.”

I just have to remember not to do any Pete Townsend windmills with my air guitar cane, because I hear rotator cuff surgery is really painful. 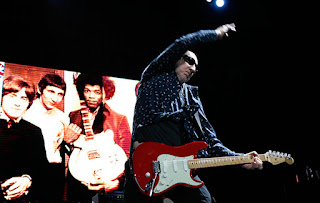 Another way to differentiate between a Grumpy Old Man and a Goofy Old Man is how they react to neighborhood kids playing in their yards. The Grumpy guy will lean out the front door and yell, “Get off my lawn!” But what I want to do instead is go outside and say, “Here, let me show you the proper way to slide into second base.”

Then a few moments later one of the kids will say, “Whoa, I was worried for a minute, but he IS wearing gym shorts under that robe.” And another kid will say, “Thanks for the baseball lesson, but, um, we’re playing soccer.” Still another kid will say, “Gee, mister, is your leg supposed to be bent like that?” Finally, I’ll say, “Could one of you call 9-1-1 on your cell phone? And look under that bush. I think a couple of my ligaments bounced over there.”

Another thing that will assist my efforts to be a Goofy Old Man is to employ malapropisms, like the ones often uttered by my two favorite cartoon characters: Bugs Bunny and Norm Crosby.

For example: “What a maroon!” “Don’t make a skeptical of yourself.” “Thank you, I depreciate it.”

Along with these: “Speak up, I don’t have 20/20 hearing anymore.” “I resemble that remark.” “He’s a vast suppository of information.”

In contusion, to be a Goofy Old Man rather than a Grumpy Old Man, I’ll have to avoid frustration and anger. The best way to do that is to trust the Big Man in the sky. Or maybe that’s the Big Man in disguise.