The senior director of medical services at Planned Parenthood was recently caught on video eating a salad and drinking wine while matter-of-factly describing the best way to crush babies during an abortion in order to harvest intact hearts and lungs and livers—all to maximize profits when those body parts are sold. In the wake of this startling video, the president of Planned Parenthood, Cecile Richards, apologized for the doctor’s tone.

As blogger Matt Archbold notes: “The only ‘tone’ that might work is maybe weeping and gnashing of teeth while begging for forgiveness from God, but I don't think that's what Richards meant, do you?”

You know what’s almost as sad as the murder of infants? The fact that you probably didn’t even hear about this story, since the mainstream media has completely buried it. When it to comes to the secular sacrament of abortion, the media simply will not do negative stories. Also, it’s sad that ultimately nothing will change. Planned Butcherhood will continue to receive hundreds of millions of dollars in tax-payer money; politicians like President Obama and Hillary Clinton will continue to proclaim that Planned Butcherhood is a wonderful organization; and the organization’s founder, Margaret Sanger, will not be vilified for her disgustingly racist views. If only she had been a Confederate general.


A question for Ms. Richards: if unborn babies are mere “clumps of cells,” how can you sell intact hearts and livers? 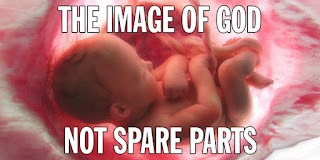